Scared and Sober(ish): How the Dean Blundell Podcast Saved My Life 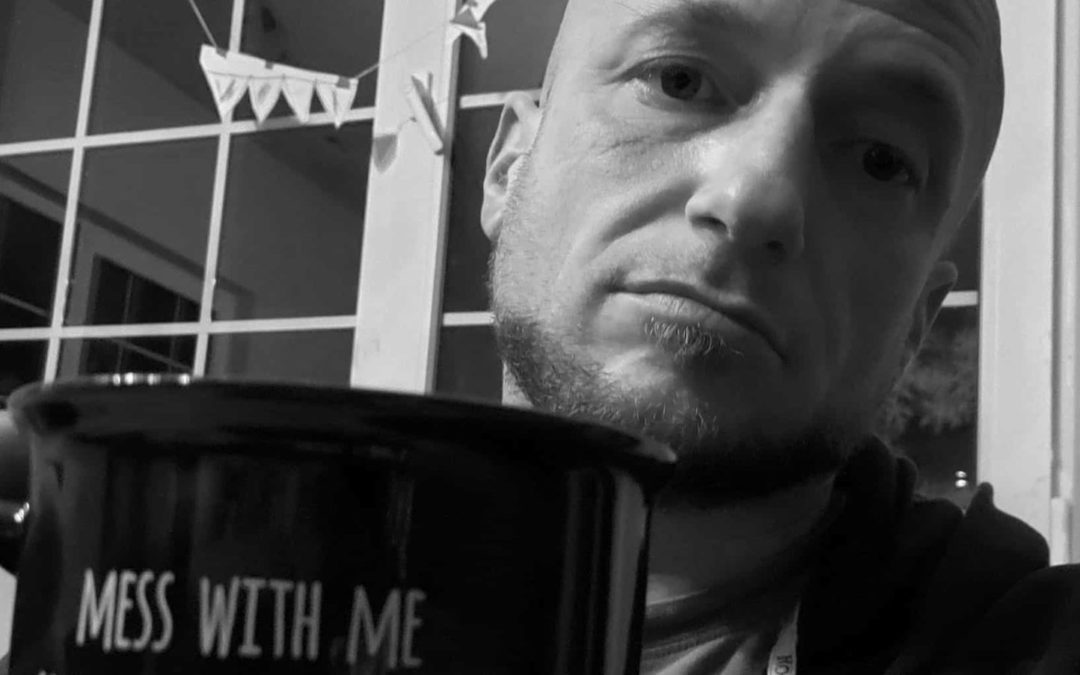 We all have that one friend who just can’t get his shit together, that guy you’ve known since grade school who manages to interrupt one colossal failure with yet another colossal failure, who is always broke as fuck, and who could never hold down a romantic relationship.

I am that one friend, or I used to be anyway.

Even typing the words “used to be” feels off, as if I am jinxing my progress or just used to the reflex of not believing anything positive about me, especially if it is coming from me. Over the years I conditioned myself to live in a state of self-doubt, a certainty that no matter what I wanted to accomplish, something would inevitably derail whatever I was doing until I found myself in that all-too-familiar setting; a dark, anxiety-ridden place known as Rock Bottom.

It took years for me to figure out what everyone in my life had always known; I was derailing my own dreams. Through laziness, a penchant for constant negativity, and an unfiltered, arrogant personality, I managed to blow opportunity after opportunity with startling ease.

I have been told by several people over the years that the trauma embedded in my life experiences can help explain my shortcomings, but that always seemed like a cop-out, a flimsy excuse that sounded more like a mantra for the weak and helpless. I was so disgusted with myself whenever I took the latitude to dwell on painful memories, as if dealing with the past meant trying to ignore it forever. Of course, a natural byproduct of never dealing with painful shit is substance abuse, and I was no exception. As mathematical as it may seem, trauma + a lack of healing = substance abuse was a fucking mystery to me. All those dark moments from when I was a youngster, or a teenager, or while in my 20s or 30s were left to fester, as if I was tasked with assembling a vast collection of horrific memories before spending my entire life pretending they did not exist.

But they did exist, and I did not know what to do with them, and so I tried to drown them in a sea of vodka, wine, cocaine, ecstasy, psychaedelics, and reckless, kinky, frequent sexual escapades. The whole time I thought I was just a dude that liked to have fun, and if I ever found myself ruminating on traumatic experiences I would shrug, call myself a pussy, and make a call to whomever I was buying my escape from that night.

What this did to my professional career was make sure it didn’t really exist. I ended up a freelancer not because I would have refused a job at some legacy media outlet, but because I couldn’t hold any job for more than a few months. I seem to have this habit of saying the words “No problem, I’ll get that done for you right away” while my face is saying, “Jesus fuck you are fucking stupid.” Hell, sometimes I just told bosses to go fuck themselves, not considering the lost income and instead prioritizing the spike of adrenaline I would feel while saying it.

So I ended up becoming this bizarre case study of one-off successes. I have produced one documentary film, and it won Best Documentary at the Phoenix Film Festival, along with a few other awards. I wrote and directed just one TV commercial, but it won Best Ad at the industry’s annual awards show. My first published article was a front page story in the Toronto Star, but I never wrote for them again. I have participated in exactly one political debate, a mayoral debate in 2010 when I ran for mayor as a fringe candidate, and, much to the horror of Rob Ford, Joe Pantalone, Rocco Rossi, and George Smitherman,  the Globe and Mail said I won the night.

Oh no, sir, I am not bragging here. This is me explaining that even when life hands me an opportunity to create stability, I manage to fuck it all up. Why? Well, sometimes I would spend the money trying to kill myself with drugs and alcohol. Often I would just go to fancy restaurants wearing a new suit so I could seem impressive to strangers, throwing away a few hundred bucks as if I had any business not putting it in the bank. If I had 500 dollars to my name on Friday, you could count on it being gone by Monday without actually buying anything other than whatever vice I was in to at the time.

It was like this for me, and by extension my partner, Michelle, until December 2019. On Christmas that year I guzzled my usual 2-3 bottles of wine and capped it with a gigantic blunt until I eventually stained the white snow with bile-laced, burgundy vomit, all hunched over as a gallon of wine poured out of my disgusting, fat frame. Oh yeah, I almost forgot. In 2019 my 5 foot 6 ass weighed 205lbs. For all intents and purposes I was a legit fatty to go along with being a drunkard, a drug user, and a partial sex addict (I don’t think I am an actual sex addict, but if there was ever a tape of every sexual experience it would take years to watch and you might suggest counselling after it’s over). In other words, I was a GREAT catch.

So just before New Year’s Eve, the last New Year’s we all celebrated before we knew what COVID-19 was, my wife and I got into a fight, and she expressed her unshakable doubt that I would always be a drinker. Now, I have never been one of those guys who talks shit about getting sober, but then never does. I’m more efficient than that as I had never even considered the option of not getting all fucked up and making bad decisions. But this time it hit me differently. I did not blame Michelle for not having any faith in me, but hearing that lack of faith expressed was a different type of annoyance. She was confirming for me what I knew to be true, and it made me feel angry and motivated.

So I turned to her and said, “You don’t think I can stop drinking? Hmm, fuck it then. I’m done.” Michelle’s face remained expressionless, her understandable doubt immovable, both because she had never known a completely sober James, ad because her dad was a really bad drunk. She had said to me countless times over the years that she would not follow in her mother’s footsteps and give her life to a lush.

Two things happened over the next couple months; I didn’t even think about alcohol, and I met a person who changed the trajectory of my professional life in a way I honestly did not think was possible.

Dean Blundell had once been the top radio personality in the country, until what might have been Canada’s first example of cancel culture happened to him. I won’t get into details as it has been talked about to death (and continues every day whenever he posts anything) but he was labelled a homophobe and summarily dismissed for a joke he said on air. Truthfully, I was unaware of all this until he told me, but I was impressed by how he spoke about it with two minds; he regrets some of the antics he displayed on-air back then, and nobody was going to tell him how to do his job, especially since he was now at the helm of what would eventually become the biggest podcast network in Canada.

So here I am, it’s the beginning of 2020, and I get thrown onto a podcast hosted by Blundell and a morning radio DJ out of Edmonton, Lochlin Cross. Despite having no regular broadcasting experience, there I was alongside two people who had 4 decades of experience between them, and since I was now alcohol-free, I had the capacity to notice a peculiar feeling every time we did a new podcast. It was different from the debilitating anxiety I was experiencing now that I was no longer a drinker. It was nervousness at the prospect of doing something that lasted.

The butterflies in my stomach usually woke up before I did, their fangs munching away at my stomach until I found myself pacing or writing or just thinking about how I could ensure that Dean and Lochlin walked away from that day’s show thinking I belonged there. My relationship with my own confidence was sometimes functional, sometimes fleeting, and I began to notice a pattern emerge; whenever I mentally prepared before the show I was funnier, or more articulate, or picked my spots better. And whenever I got really high and jerked the day off before a show, Dean and Lochlin would carry the load, often in the form of busting my balls after I would communicate “fuck both you fucks” with my face. 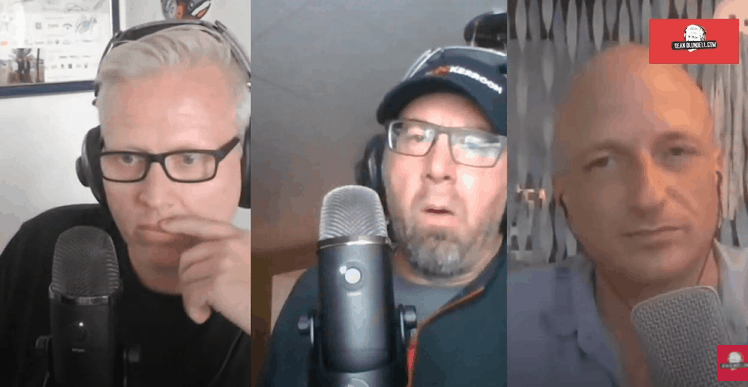 Turns out whenever I get upset there is a good chance the content will still be ok, a testament to my co-hosts. At the same time, and this was an echo from how Drunk James would often feel, I would walk away from those tense episodes thinking I was no longer part of the show’s inner circle. I’d sit there wondering if I had burned a bridge with Lochlin, or if Dean had placed me in a ‘Co-Worker Only’ box. I know, it’s sort of pathetic, but when you are attempting to go against 40+ years of bad habits – telling off authority figures, not filtering the toxicity from my speech, not mentally preparing, drinking stupid amounts of red wine and vodka – the road isn’t exactly smooth, but it came with a book deal, a co-write with Mike Bullard, and other opportunities that Drunk James never seemed to find.

Sure, Sober James might still consume enough mushrooms to kill a sasquatch, but here I am, 1/3 of one of the most popular “Daily News” podcasts in Canada. Yes, our version of daily news often comes with a side order of Lochlin’s testicles and freakishly stretchable scrotum, but that’s ok too. We are three grown ass men with our finger on the pulse of profound immaturity, and it’s fucking awesome to be a part of it.

Moreover, ever since Lochlin promised to stop drinking completely in 2022, we can look forward to a show where his obvious alcoholism no longer derails an otherwise amazing show. So congratulations Lochlin, you Arby’s-eating, good point-interrupting, porn-addicted, midget-abusing, Speedo-sporting Neanderthal!

And Dean, thanks for taking a chance on this former fuck-up. You may have saved my life, homie. I love you guys.

See you on the podcast.