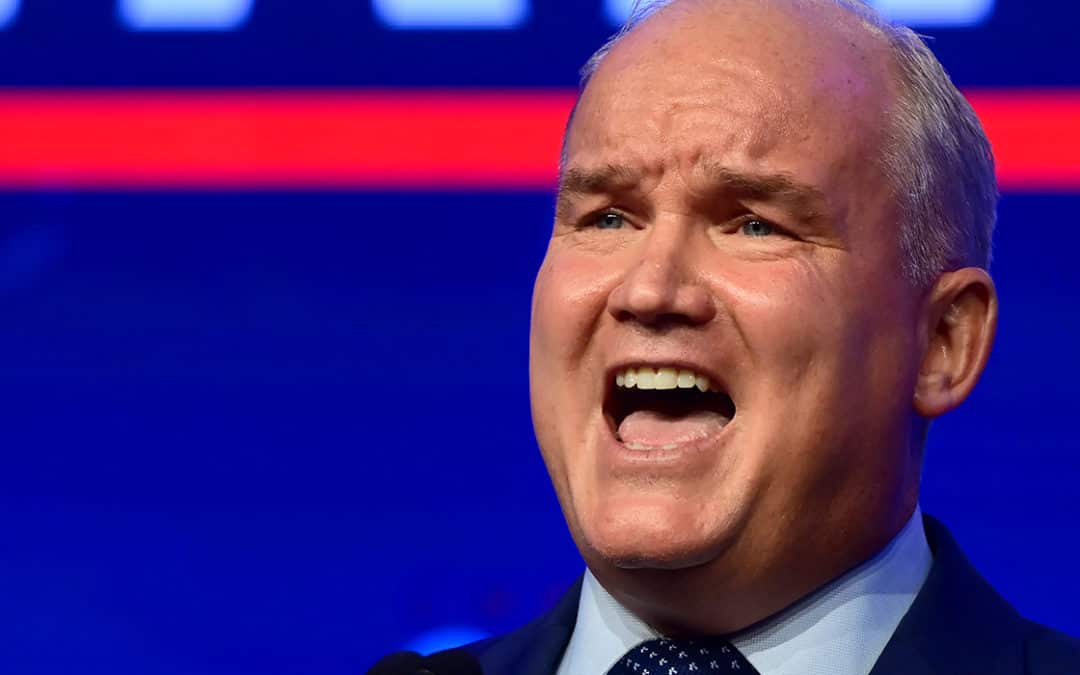 Last week during the Dean Blundell podcast I likened Conservative Party of Canada leader Erin O’Toole to a manager at Home Depot. I think I may have made a terrible mistake when I said those words, and for that I would like to unreservedly apologize.

I mean, in order for that to be true, O’Toole would have to know how to fix things, and if we are being honest about his time at the helm of the CPC, O’Toole is not a man who is quick at repairing anything, most notably his own party.

But I feel bad for O’Toole in a way. His job is almost impossible, and you can tell he is frustrated at the water treading he is doing as he leads his party into the same place it was when he took over – unable to get a bump in the polls, and in all likelihood another second place finish in the next federal election.

Which brings me to The Flintstones. In more than a few episodes one character would chase another inside a house or a building, and the background would repeat itself in a constant loop. This animation technique is referred to as the wraparound effect. The wraparound effect saved money and time, but eventually was seen as an out-of-date, substandard way to do cartoons, and so this method was scrapped. Well, the Conservative Party are in the midst of their own wraparound effect, attempting to cut and paste archaic strategies onto their present-day hopes, and of course it will probably fail.

Currently, the party receives a lot of donations from the fringe of the conservative landscape. Fundamentalist Christians, staunch libertarians, Trumpian folks, people who have a guttural hatred for Justin Trudeau – all of these sects when lumped together probably account for around 30% of the party’s overall support. This means O’Toole can’t speak out with any kind of forcefulness against climate change deniers, pro-life activists, COVID  and COVID vaccine conspiracy theorists, or virtually any out-to-lunch group that leans heavily to the right because he would risk losing a good chunk of cash and the election itself.

Just one problem – he can’t get elected by not speaking out against these people either. The reason the Libweral Party doesn’t have the same problem is because they have the NDP to swallow up the Nikki Ashtons and Jagmeet Singhs of the world.

O’Toole Chief of Staff Fred Delorey tells #CPC21 that the Liberals are “bad at governing [but] they are very strong campaigners” Promises CPC #elxn43 strategy will focus on finding new voters and getting those new voters to the polls.

Evidence of the devastating impact the right wing fringe has on the party isn’t difficult to find. For example, at this year’s convention delegates debated whether or not they believed climate change was real. To an overwhelming majority of Canadians this issue is a done deal, and the mere fact that this type of debate is taking place means the party is splintered, and the only way to unite the troops is to kiss another election goodbye.

O’Toole needs more than better marketing and better messaging. The man is awkward, an average speaker, hasn’t shown glimpses of greatness or anything, and that’s what’s so sad about the conservatives. They get wrapped up in their grievances so deeply, that their way of bucking the ‘libtard’ system was to give the helm to a middle aged white guy, a man who approaches the job  with all the pizzazz of a student home reno outfit, minus the students. That’s right, suck it up conservatives. You might as well since most of you don’t have teeth anyway.

Q: How many progressives does it take to propose free ADHD medication?

To conclude, Erin O’Toole will never galvanize the country, even with the scandal plagued, crisis management addicted, phony on all levels Trudeau Government skipping obliviously into the waiting arms of yet another fuck up.

That’s how meh this leader is, and I’m pretty sure almost everyone knows it.