General Robert Spalding Interview: ‘China is already at war with us.’ 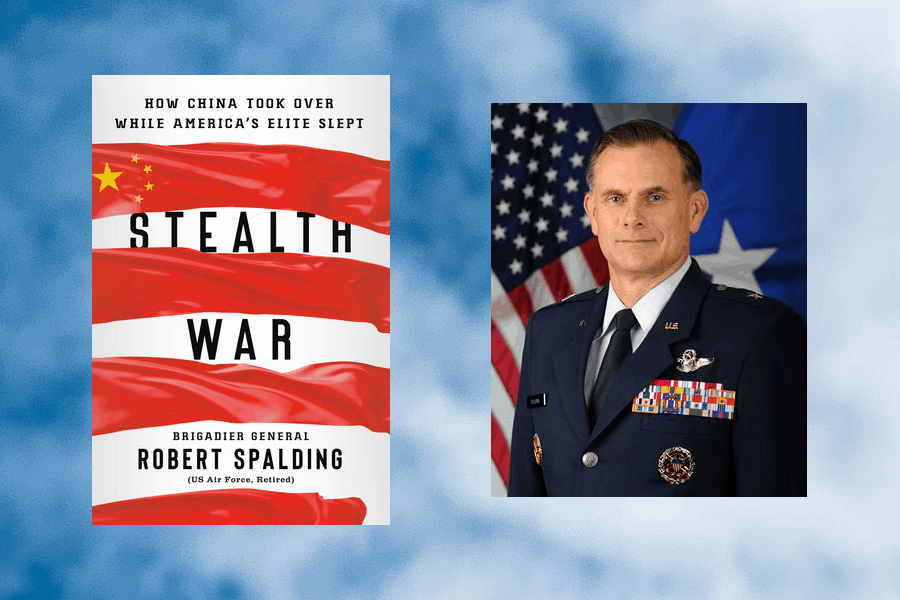 General Robert Spalding is the current Assistant to the Vice Chief of Staff of the U.S. Air Force, and the former Trump Administration’s Senior Director for Strategic Planning, part of the National Security Council from May 2017 – January 2018.

This interview has been edited for space, but you can listen to the unedited interview later today on the homepage.**.

Your book – Stealth War: How China Took Over While America’s Elite Slept – for dark reasons your book probably couldn’t be more timely.

It seems like it was tailored made for this time. In a lot of ways it was. I worked on the National Security Strategy and I could see where this relationship was heading and I wanted to inform people.

Can you give us a handle on President Trump’s strategy on how he has handled the coronovirus – he initially downplayed it, contrary to almost every health expert – and also his strategy regarding China?

First let’s examine what you just said. I think that the President from very early on banned flight to and from China and was soundly criticized for it. At the same time, both the WHO and the CDC were saying that there wasn’t a problem in spite of the fact that the WHO knew there was human-to-human transmission. So, I think the narrative that the experts were saying that this (Trump’s reaction) was bad was not true. It’s just not backed up by data. I think right now what the administration is trying to do is deal with the fact that we have a global pandemic that we should never have had in the first place.

You appeared in a documentary produced by The Epoch Times recently. There were several medical experts who also appeared who imply that COVID-19 originated in a lab and not the wet markets in Wuhan. To your knowledge, does anyone in the Trump administration share this belief, and why isn’t anyone talking about it?

Taiwan took action very quickly in December when they realized that the Chinese Communist Party wasn’t being forthcoming. They alerted the WHO and instituted measures within Taiwan that have been highly successful. What we have to question is, how is it that the world followed the WHO which followed the Chinese Communist Party when at the time just 70 miles from the mainland we had a country that was actually responding to it probably the best way any nation has.

We need to reexamine how we are dealing with this global pandemic, and the WHO’s role. In the United States we need to examine the CDC’s preparedness to handle pandemics.

I think all nations really need to reflect on how they have reacted to this.”

I find this issue has become polarized, which is not unusual in this day and age, but is the public distracted via fragmented information? Is it even possible to find out the origins of the virus or are we going to have to take our best guess?

“What we have to examine is the connectedness of authoritarian or totalitarian regimes to the globalized free world. If they’re not going to be transparent about things this presents a danger to all of us. They allowed 5 million people to leave Wuhan and they knew they had problems with human to human transmissions. So, if they had locked the city down earlier one of the studies says we would have had 95% fewer infections worldwide.

“We started to look at this in 2014 at the Pentagon and realized that this idea of treating the international order as if you don’t have to abide by any of the rules really creates a danger.”

What would it mean for the planet if we found out China created the virus, and will we even find out if that was the case?

“We’re not going to find out how this happened until the Chinese Communist Party is no more. But they were doing bat-related, Coronavirus research specifically on gain of function, and they had published a paper on a strain that was infectious to humans. You have to ask yourself, ‘why would they be doing that research? We discontinued that research in the United States after criticism, and rightly so. There is no rational purpose for that kind of research.”

Why are no outlets talking about the possibility that this virus came from a lab, with the exception of independent outlets or ideological outlets?

“What I have found in my time working in the Pentagon and the White House is that most of our institutions, not just international institutions like the WHO and the UN, but also domestic institutions in the United States like think tanks, corporate America, Wall Street, universities – are essentially co-opted by the Chinese Communist Party. A lot of these institutions receive funding either directly from the communist party, or indirectly through others that are associated with the Chinese Communist Party. The money in the system is so expansive…every bit of our society has the influence of this money in the system. We tend to believe that the mainstream media is there to portray the truth. The reality has become much more polarized, and in that polarization there is a large amount of obfuscation of what the Chinese Communist Party is doing. It is by design. This is how the CCP exercises its foreign policy.

“A war with China looks like exactly what we have today. This is the way they choose to have war. It’s not in the traditional sense where we think of ‘military activity.’ That’s not the way they go to war. It’s ideological, it’s political, it’s propaganda. It’s not wars on battlefields. Those are risky. That’s not to say that they won’t fight if they feel the need, but it is not their main focus of warfare.”

Is it possible for America to dislodge its relationship with China without facing economic ruin?

It’s impossible for us to remain a free country if we don’t. We are slowly being compromised – our values, our principles, our openness, our freedoms are slowly being eroded. It’s not just the United States, it’s happening in Canada too.

Trump’s praise for President Xi – is it just a strategy towards an adversary as important as China?

“Trump is preserving lines of communication. It doesn’t help to create animosity if you have to continue to stay engaged with China.”

Your book is called Stealth War: How China Tooke Over While America’s Elite Slept – who are the elite in America?

“Corporate leaders, Wall Street leaders, some in politics, some academia leaders, some in think tanks – these are the ones who are the decision makers in society. These are the behind the scenes power brokers. We know that this exists because we know political campaigns are full of money, and that money comes primarily from Wall Street and corporate America in the United States.”

That China has infected every influential institution in America is hard to believe. Is this view pervasive, or is this something only a few people are noticing?

“They have so much resources to throw at us. In counter intelligence you have traditional and non-traditional collectors. You have co-opted people who do things for their own interests. When you have the #2 economy in the world and decide not to abide by domestic or international laws, it allows them to then incentivize the system to be in their favour.”

How can China have so much influence over the WHO when they have so little money in the game compared to the USA?

How urgent is this dysfunctional relationship between America and China?

“When the National Security Strategy came out in December 2017, about the first quarter of 2018, the US federal government turned towards enforcement of the rules. What you are seeing since then is an ever-increasing level of enforcement, including working with allies and partners so that they can begin to do enforcement as well.

Looking at the pattern of behavior of the Chinese Communist Party you can see that what the USA is doing is in its own best interests as a democracy, and I think if other democracies are wise they will do the same, and it seems like they are.

“One of the things the media misses is all of the diplomacy that goes on behind the scenes between allies and partners. Certainly Donald Trump is a non-traditional communicator, but what the federal government is doing, and has been since 2018, is moving forward with enforcement.”

In the Cold War, the concept of ‘mutually assured destruction’ sort of put the two powers in check as much as possible. Is there a modern equivalent between China and the USA that would stop China from provoking America? In other words, is there an awkward path to peace?

“The element of nuclear weapons never went away. It just became a feature of great power politics. There is a realization that warfare among great powers is actually too dangerous and risky. Therefore, we have to find other ways of competing. In the case of the United States I think we made the wrong decision to believe that Chinese Communist Party would accept our overtures, being bound into an international order that was focused on liberal democracy and free trade. Now we know that was not the case; they were actually pursuing another order, and they’ve actually been quite successful in influencing international institutions to towards their end. Now it requires us to rethink how we engage.

Does that mean we will provoke China into a military conflict? No, it’s not in anybody’s interests. The Chinese Communist Party knows it is not in their interests, and we know it is not in our interests.”