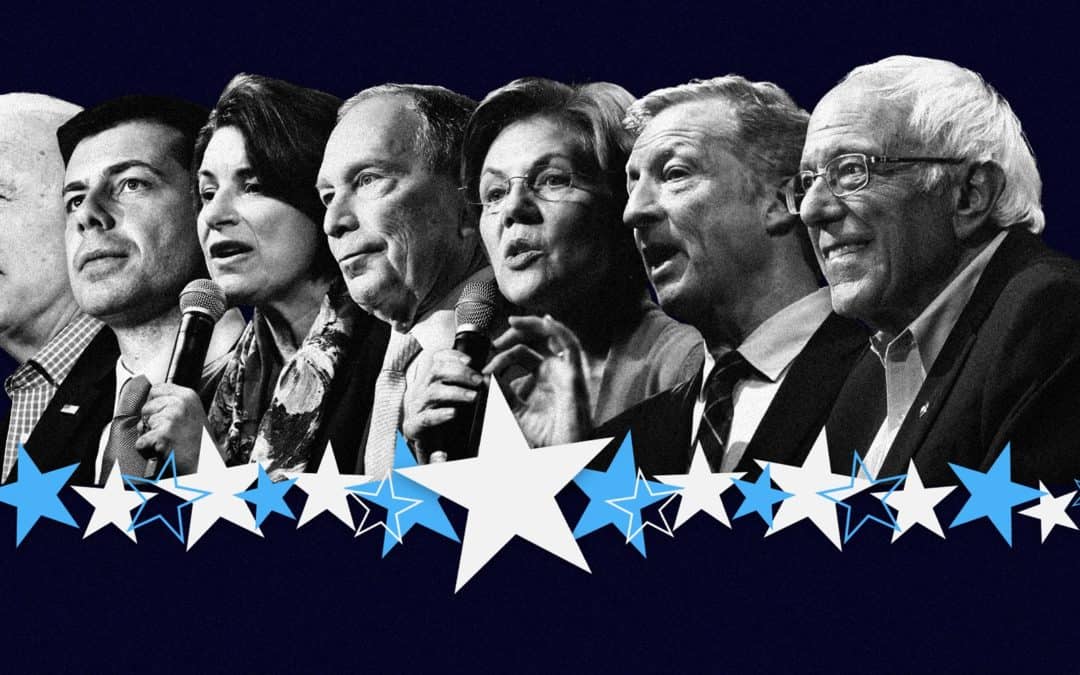 After a somewhat promising debate in Nevada, the Democratic Party virtually imploded last night as candidates desperately tried to light a spark under their campaigns, mostly by relentlessly attacking each other while interrupting one incoherent sentence with yet another incoherent sentence.

With most of the candidates focusing their ire on Bernie Sanders, the stage felt more like a crowded version of The View than a serious political discussion. Candidates constantly spoke over each other and resembled eager grade school students vying for the teacher’s attention as they furiously raised their hands in an attempt to get the moderators to give them a chance to rebut the constant stream of abuse.

While Sanders tried to fend off the attacks, Elizabeth Warren tried to siphon some of his support by placating portions of his social policies, but her tone was that of an all-knowing mother hen as she attempted to come off as the lone, progressive voice of reason. Unfortunately for Warren, she also reiterated a story of being fired when she was pregnant as a 21 year old teacher, even though she is on record saying she chose not to go back to that job.

Here are 2 videos with #ElizabethWarren giving two totally different accounts to of why she left her teaching job. In 2007–very different story. Or so it seems. Has @nytimes or @washpost looked into it? Extraordinary if she made up story about being fired for being pregnant. https://t.co/ldUrP4TUr2

Her inconsistencies on personal details crystallizes how her campaign has stumbled, whether it is her ethnicity, her flimsy accusations of sexism, or her inflammatory accusations against Mike Bloomberg over old, unproven allegations of viciousness towards women.

Bloomberg once again seemed out of his element, even though he performed marginally better than he did in Nevada when he was systematically dismantled by nearly every other candidate, including and especially Warren. He flubbed what was supposed to be a moment of levity saying about his fellow candidates “I’m surprised they showed up because I would have thought after I did such a good job in beating them last week that they would be a little afraid to do that.”

The billionaire also took a page from former New York Mayor Rudy Giuliani, using 9-11 as a political prop, even going so far as talking about the ground “still smouldering” when he took office and how great he did getting the city to bounce back. Even if that claim is partially true, it reeked of cheap opportunism for a guy not known for his personal touch.

Not to be outdone, Joe Biden tried to pass himself off as the great white saviour of people of colour. When asked about wealth inequities between black folks and the rest of America, Biden proclaimed the following; “My entire life I have been involved with the black community….I worked in the projects…” He went on to tout his record as Chairman of the Judiciary Committee where he extended the Voting Rights Act and did away with redlining as a young city councilor. (Redlining is a term used to describe the denial of loans and insurance based on whether the applicant lives in a poor neighbourhood where minorities often reside).

Biden so desperately tried to ingratiate himself to visible minorities that if he raised a gloved fist and randomly began mumbling Public Enemy lyrics only about half the audience would have been surprised.

Amy Klobuchar’s performance was painfully inconsistent; seeming fairly competent one minute only to find herself completely flustered the next. There is ample reason to believe she will drop out of the race before Super Tuesday.

One candidate who should have already dropped out is Tom Steyer, who has the dubious distinction of being the only candidate on stage when most of America probably still doesn’t know his first name. He was largely invisible for most of the night, and his repeated proclamations that America is beholden to corporations, while accurate, sounded disingenuous and flat coming from a billionaire.

Those were the words of Pete Buttigieg, who is apparently too young to know that the revolutionary politics of the 1960s included the struggle for civil rights, women’s rights, and anti war sentiments. Buttigieg once again touted his military record, but did so in a way that made it seem overly rehearsed rather than sharply delivered. Mayor Pete always seems to strike the right cadence, but he has proven to be woefully ineffective when trying to go on the attack or inspire voters to throw support his way.

All of these candidates, try as they did, just could not find a way to effectively tear down the front-runner. Sanders, who probably did not perform as well as he did in Nevada, still managed to stay on message, even recognizing his past mistakes.

When pressed by Biden on his failure to vote for an assault weapons ban, Sanders owned his shortcomings.

“I have cast thousands of votes, even bad votes.”

He was referring to his votes against assault weapon bans. Gun violence is an issue where all Democratic candidates sing from similar playbooks, a staple in progressive circles where they try to balance the need for sensible gun laws with their feigned respect for the Second Amendment. It was a rare moment of humility from a politician. Don’t get me wrong, Sanders has no problem touting his own positions as being the best policies for Americans, but to hear a politician admit that he has voted the wrong way more than once was powerful, and probably resonated with many democrats watching at home.

While not a landslide victory or even a top tier performance, Sanders did what a frontrunner is supposed to do – he held his ground, remained consistent, and competently rebutted most the attacks against him.

Biden and Sanders are polling within the margin of error in North Carolina. A Sanders victory would further cement his status as the frontrunner, while a Biden win would resurrect his campaign, even if it does seem to be too little, too late.

The audience, who seemed to be largely comprised of mostly Biden and Bloomberg supporters, evident whenever either of them said anything even moderately impressive, would rain down a chorus of boos when anyone else spoke, and coincidentally paid $1750/ticket.

NBC reporter: “It seemed like you were almost arguing & debating with the crowd.”

Bernie: “Ahh, interesting question! You know how much a ticket to the debate cost? $1,750. Most working people I know don’t spend $1750 on a debate.”pic.twitter.com/LlErigZzPm

Overall, it was a night with more cringe than aspiration. It was a night of less civil discourse, more desperation. A shit show, in other words, only far less entertaining.