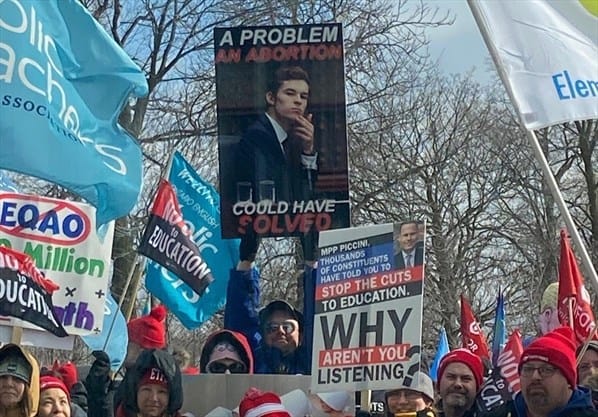 A lone wolf activist who turned up at a protest outside the Progressive Conservative convention in Niagara Falls wielding a controversial sign was falsely identified as a teacher and union member by conservative media and various PC Party MPPs.

Adam Stirr, a 37 year old man who calls himself a provocateur and an avid animal rights activist, showed up at the convention with a sign featuring a photo of Niagara West MPP, Sam Oosterhoff, with the caption ‘A Problem Abortion Could Have Solved.’

Stirr says he has no affiliation with the teachers or their union, and said a few of the teachers at the protest criticized him for the content on the sign. He says his intention was to raise awareness of Oosterhoff’s position on abortion, and what he calls his “extremist religious beliefs.” He also stated that he was not there to support the teachers in any way.

Ontario Government House Leader Paul Calandra demanded an apology from the Ontario Federation of Labour, despite the OFL having no connection to the activist.

“I think when I look at what was happening here today, I think the OFL can start by apologizing for the sign – the absolutely awful sign that was displayed today. If you want to talk about the quality of the debate and the tenor of the debate, I stand ready, as do all of my colleagues … to talk with the OFL, talk with any union … but I don’t think union members, I don’t think members of provincial Parliament, I don’t think people – the general public – have any tolerance or patience for the type of debate and the type of things that we saw displayed today. If (the OFL) really want to have proper discussion with government, they can start by apologizing, unreservedly, for the display today.”

Calandra’s attempt to falsely connect Stirr with the unions protesting outside the PC convention was echoed by embattled Education Minister Stephen Lecce, who tweeted the following.

We raise our children to be civil, decent, and respectful.

This language has no place in our democracy.

I’m calling on all education union leaders to unequivocally condemn this.

The manufactured controversy was amplified by conservative journalist Brian Lilley, who tweeted “The teachers protesting at the Ontario PC policy conference are keeping it classy.”

The teachers protesting at the Ontario PC policy conference are keeping it classy. This guy, surrounded by Catholic teacher flags, holds up a sign saying MPP Sam Oosterhoff is “a problem an abortion could have solved.” It’s a sick and disgusting remark. #onpoli #cutshurtkids pic.twitter.com/ixbc2bY4Nu

I reached out to Lilley for comment but he did not respond.

The Ontario PC Party have banned media from their policy convention, making it more difficult to report on ongoing developments. Security was so tight that a CBC reporter was interrupted during a live broadcast by event security who demanded they leave the property or risk getting the police involved.

The security firm later said they were ordered by the PC Party to remove the CBC reporter, however they did not name the party official who gave the order.

Stirr’s controversial sign has made the rounds at various protests in recent months, including a pro life event where Oosterhoff was speaking last year. It was once carried by an unidentified woman at another pro life gathering as part of a protest group outside the event.

Stirr says he made the sign in May, 2019, and appreciates that some people may not appreciate what he calls his “dark humour.” He also issued an apology to the teachers and union protesters for co-opting their rally and causing people to attribute his actions to them.

“I’m sorry to the teachers that it got dumped on them, and to people who are upset…”