If free speech were a movie, Ricky Gervais is the theme music 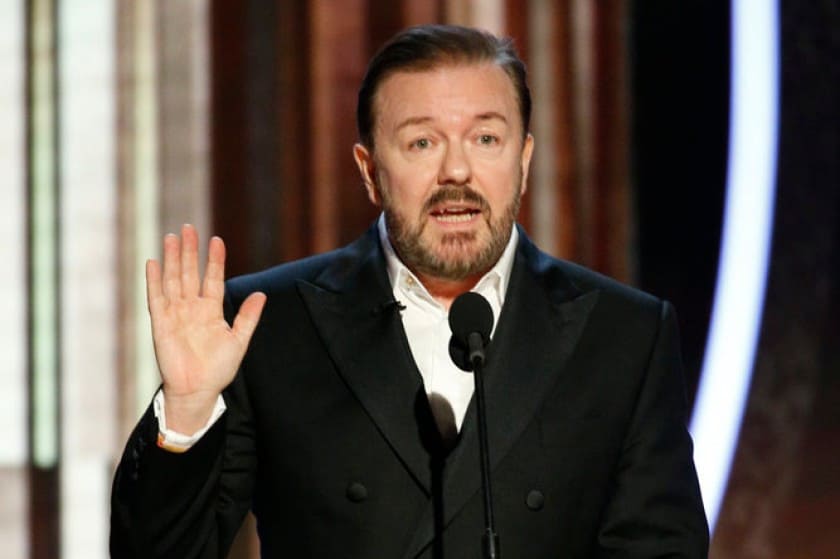 I am friends with a person who is the black sheep of a billionaire, hedge fund family. They hob knob with celebrities and other billionaires. They have a 50, 000 square foot compound in Florida. Harvey Weinstein was in his sister’s wedding party.

Dinner was always a weird event. You never quite knew what you were being served. Everything was just so foreign, and rigid.

When Ricky Gervais lambasted Hollywood at the Golden Globe Awards last week, I was immediately transported back to various conversations I had with my friend who told me surreal stories of how his family would talk about common people. They didn’t speak with hate, or disgust; they just had no idea how the rest of the world worked. They were out of touch.

Gervais’ opening monologue was an indictment on several fronts. First, like my buddy’s billionaire family, his targets were people with a very limited societal barometer. These are a collective of like-minded individuals without the self-awareness necessary to laugh at their own admonishing. They don’t know how much a loaf of bread costs, how to fix a broken cabinet, or how to take a joke.

Here is the full monologue given by Ricky Gervais at the #GoldenGlobes: pic.twitter.com/CE4UzGKP3O

“They’re just jokes,” Gervais pleaded. “We’re all going to die, and there is no sequel.”

That last bit reflects Gervais atheism, which was fitting given that many of these privileged Hollywood types seem to think that god had something to do with them winning an award for pretending to be somebody else. As if Jesus, if that is who these people believe is “god,” would take the time from his busy schedule to adorn an already-wealthy, already spoiled individual with a tacky statue for being in front of a camera.

Beyond that, Gervais has found himself in a place where only he seems to live; a spot inside popular culture where he can’t be manipulated, can’t be shamed, and won’t be cancelled. To accomplish this, all Gervais has had to do is remain true to who he is – a funny, joke telling, pleasantly arrogant contrarian who refuses to fall in line in order to appease the gatekeepers of what we can and cannot say.

Oh, but how they try to destroy him.

For months, radical gender activists have been tirelessly attempting to cancel Gervais over his sarcastic tweets about the pitfalls of trans ideology, but none of it sticks. The reason for his Teflon-like resilience to the mob is actually quite simple; he refuses to submit to them, apologize to them, or give them an inch regarding what he is allowed to say. His devotion to free speech, incorrectly viewed as an indication of right wing tendencies, shields him from the typical stumbles others might experience for saying the same things.

But the Golden Globes performance didn’t include any of those controversies. That’s what makes the blowback so bizarre. His jokes were at the expense of the elite, people who use identity politics as a way to virtue-signal, proving they are all on the right side of history. His delivery was a rebuke on how ridiculous we have become in our quest to be seen as neo-inclusive, such as him telling the audience he did away with the In Memoriam segment because it wasn’t diverse enough.

“Maybe next year,” he chided.

The irony in this ridiculous controversy is that Gervais was probably the most authentic progressive-minded person in that room. He is an animal rights activist, he cares about the environment, and his disdain for corporate hypocrisy was even part of his act. With Apple CEO Tim Cook in the room, Gervais pointed out that Apple uses Chinese sweatshops to make their products. If that isn’t the most crystallized example of a progressive calling truth to power, I don’t know what is.

Of course, Gervais knows all of this will eventually go away. He was apparently paid an unseemly amount of money to excoriate the wealthy, and since the Golden Globes he has earned 300, 000 new Twitter followers. The second season of his Netflix hit Afterlife is in post-production, and he is about to hit the road with his new tour ‘SuperNature’ in February.

And yes, he is worth over 100 million dollars. Still, he comes off as an everyman, and that is why he is so successful.

Thinking back to my buddy’s billionaire family, I am reminded of the time I sat at one of those long dining tables, 6 of us eating our soup course, when a loud tapping sound filled the high ceilinged room. It was the patriarch banging his spoon against his plate. One by one we all looked up at him as he scolded my buddy for keeping his napkin on the table instead of his lap.

“That’s not how we eat in this house.”

Apparently, Gervais plans on keeping his napkin on the table, while the rest of us try to ignore the yammering of those too out of touch to notice if we are even enjoying what’s being served.