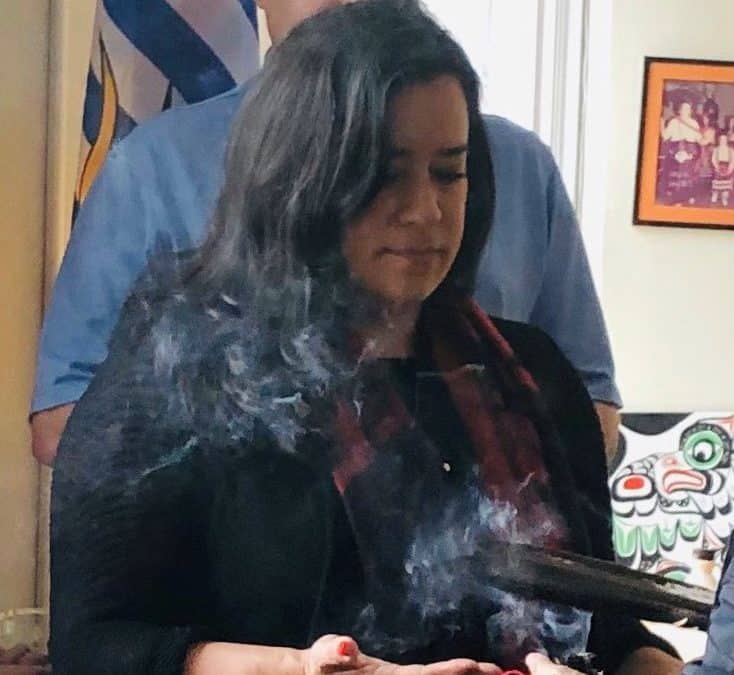 Shhh…quiet. Do you hear that? It is the media walking on eggshells as they report the new saga of Jody Wilson-Raybould. You can hear the crunching from Vancouver to Toronto, without even trying.

I’m not so inclined to do the same.

Today Wilson-Raybould is technically a squatter, refusing to leave a ministerial office even though she hasn’t been a minister in almost a year. She doesn’t have a party. She is an independent MP who believes she is entitled to the space an elected official with an actual portfolio is entitled to.

So let’s be honest about a few things.

First, conducting a religious ceremony in the disputed office, a move she said was intended to “protect the space,” is cheap. There is just no other way to put it. The only thing she has protecting her from being hopelessly and rightfully ridiculed is her identity as an Indigenous woman. Any other denomination would be getting destroyed by every media outlet in the country, and rightfully so.

All of a sudden Quebec’s law against religious symbols almost sounds like a good idea.

Nobody wants to call out an Indigenous woman in 2019. Just the idea of doing so is wrought with booby traps and a sense of pointlessness. But really, what she is doing is indefensible, unless you admit to wanting to coddle her, which is prejudicial and condescending.

If the basic principle is that certain offices are for ministers only, and you are no longer a minister, the only call is to leave the office gracefully. A person’s gender, ethnicity, and religious beliefs are entirely immaterial to the principle of being able to follow rules. Even if she believes she was unceremoniously ejected from cabinet, that injustice does not give Wilson-Raybould justification for holding hostage the space no longer meant for her.

That is why this is so cheap. Wilson-Raybould appears to be using her identity as a shield to get away with something that the whitest and most privileged among us would never get away with. I hate making that point, by the way. It sounds like a dog whistle to the intellectually stunted, those who are too timid and too dogmatic to call out people based on facts. These identity politics ideologues throw cloaks of infallibility onto minorities, women, and religious folks to protect them from injustices, even if they are the ones perpetrating the injustice.

Wilson-Raybould is executing a deliberate strategy, daring the Trudeau Government to take action against her. Imagine that, a white (sometimes), trust funded Prime Minister evicting an Indigenous woman from a space she just finished having blessed by an Indigenous elder.

But wait, isn’t that the problem? Can someone please inform the public if double standards are now the norm, or if there is a section inside the Truth and Reconciliation document that allows Indigenous women the right to openly flout the rules while attempting to use superstitious beliefs as a force-field while doing so?

Make no mistake, that is what we are talking about; using gender, religion, and identity to muddy our principles. The media won’t criticize Wilson-Raybould the way they would if, say, Stephane Dion had refused to leave his office after he was shuffled from his cabinet position. And if Dion had invited a bishop to bless the office to protect it from the landlord, we would still be mocking him unreservedly.

Wilson-Raybould should be given the same treatment. She should be mocked and labelled as an entitled, petty, typical opportunist who uses her identity status as a weapon. The irony is thicker than a know-it-all accent on a secretly recorded phone call, if you feel me.

The soft bigotry of low expectations is a legitimate form of racism. By allowing Wilson-Raybould’s behaviour to go unchecked, we are essentially saying that we do not expect any better from her, that we have to accept behaviours from her that we would never accept from virtually anyone else, all because she’s a Native Canadian. I guess some well-meaning progressives simply believe Indigenous women are more susceptible to behaving badly. Or maybe turning a blind eye to bad behaviour when it is from an Indigenous woman is a new form of reparations.

Of course, all of that is condescending. After all, Wilson-Raybould is a very successful, accomplished person. She is a former cabinet minister, a former attorney general, and a newly elected independent MP, which is no easy task. So I for one have full confidence in her ability to read, process, and follow basic rules.

But these days, most of our news media would rather walk on eggshells than risk getting caught quietly reporting the truth.