A Walk to the Pond 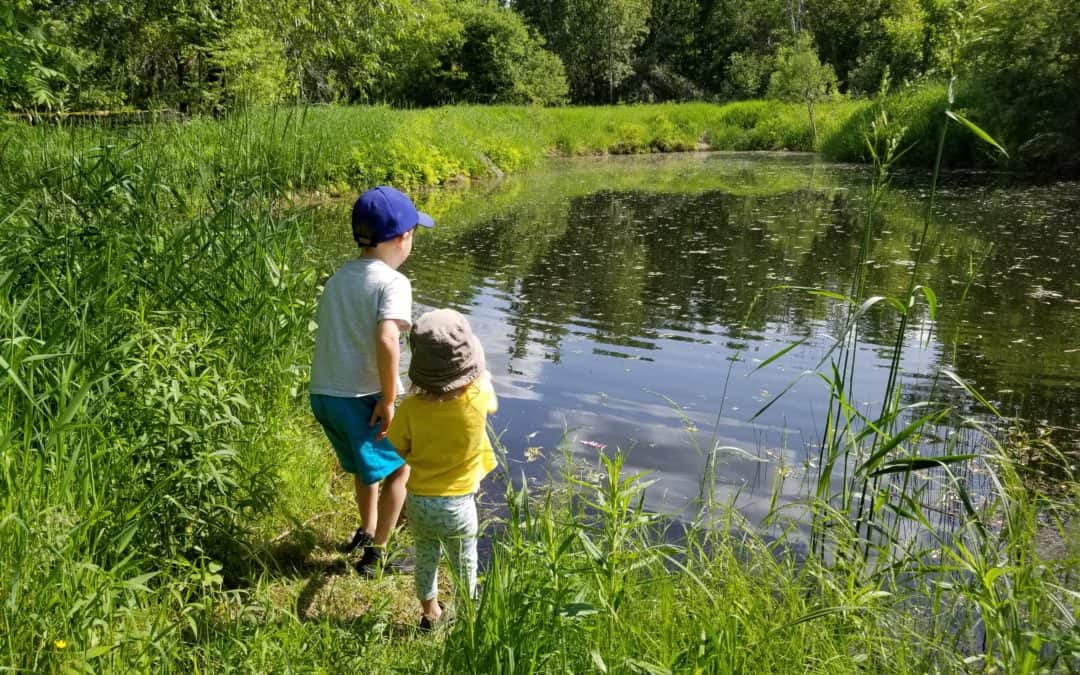 Do you remember the smells of your childhood? Yeah, me too.

Specifically, my ability to recall the fragrances of the cottage in Quebec where my family visited as a child is instant. It’s also intoxicating. It’s a mix between general cottage mustiness, the lingering aroma of my grandmother’s cooking, and a slight hint of pine needles.

I do not have specific memories of individual trips to this cottage. At 43, the best I can muster is a pleasant cluster of moments stitched into the fabric of my childhood. These are the memories I’ve stolen from myself, for myself. My parents were still together. My sisters and I didn’t bicker endlessly at each other yet. We still had our grandparents on the Italian side and a loving respect for our extended family.

Time stood still at that cottage. There was always just so much to see.

Life was everywhere, like the insects and critters along the short walk from the cottage to Lac Bleu. The red ants, the caterpillars, the moss, the chickadees, the chipmunks, and a set of cement stairs that led into the water. There was a small dock perched to the left of the stairs. My grandfather and I used to set crawfish traps near the shore beside the dock. Sometimes he used garlic bread as bait, telling me the olive oil is what attracted the crawfish, and in the morning we would find 4 or 5 of them, which was a considerable haul. He would joke that the crawfish were Italian too.

My grandfather and I fished on that lake for hours at a time. More granular memories stretched into a stand-alone vision; fishing with worm on a small motor boat, catching perch, crappies, catfish, walleye, and bass. After a good 7 hours or so we would call it a day, bring in the fish we kept and cleaned them in the garage. We then gave the fish to my grandmother who would turn them into magic with a side of tomatoes, onions, and dandelion.

When the family all ate together it was really loud. Everyone was talking, arguing, laughing. We played cards, pretended not to notice when my grandfather was drunk, watched hockey, and I could choose at any given moment to pause so I could take in the fragrance I would recall so easily decades later.

Those trips to Quebec hold so much meaning for me, to the point where I wonder if I have over-romanticized these moments. Maybe the echoes of these times are disproportionate to their actual impact. Hindsight tells me I needed that nature before the shit hit the familial fan at home. Teenage pregnancies, divorce, delinquency, and a wicked step-mother from the nether legions of hell needed the softness of peaceful memories to offset the stress.

These memory fragments of this cottage in Quebec also strengthened how much I value the importance of a tight knit family, concepts that I lost after early childhood.

I was raised in the suburbs, a town called Whitby, Ontario. After college, I spent 20 years living in Toronto where I met my wife in 2009. By 2016 we had two young children, and that year we moved to Michelle’s hometown of Killaloe, Ontario. After a stint living with her parents, we began renting a house adjacent to a cattle farm, with a rocky driveway that snaked a half kilometre to a lovely, small pond.

Almost every day we take a walk to that pond, and almost every time we see the things I used to see when I went to that cottage in Quebec. My kids see ants (black ones instead of red), caterpillars, frogs, chickadees, chipmunks, and other creatures. On rainy days they get on their rubbers and jump in the puddles. On wintery days they walk on the frozen pond and ask me to get a stick so they can tap it against the ice. We look at the footprints in the snow and decipher them. Some are deer, some are wild turkeys, some are from stray cats, and some are from rabbits or wolves or coyotes.

But most of the footprints are from my family, evidence of time shared, a fold in the page of a chapter of their lives when our family was young and together. Hopefully it will be just another detail in a happy childhood for them, when their family would stroll inside our own private piece of nature. When everything was simple. When time stood still.

Keeping a family together and happy can be challenging. Sometimes it can feel like bliss, and other times it can seem as rocky as that driveway that leads to our family pond. I have noticed the older I get, the more I gravitate towards a mindset where giving kids two parents under one roof is more important than almost everything else. On those walks Michelle and I are a unit, a force trying our best to condition our kids to inherit the building blocks for their future bouts of bittersweet nostalgia. They may even learn a few other things along the way.

I wonder which scents they will carry once these memories begin to fade into one experience for them. I wonder if they will feel the same urge to revisit the part of their minds where these moments live on, the lens getting dusty and blurry. I wonder if Michelle and I will be successful making sure their home does not become broken, turning those walks into the ground floor of family stability.

My daughter has learned to love butterflies. My son watches where he steps so he can avoid crushing ant hills. He even taught my daughter to mind the ants, and my daughter now reminds me every time. They are developing a sense of environmental responsibility, and an appreciation for critters, nature, and hopefully togetherness as well.

Time moves on, and even though life can often tick by at a comet’s pace, I can always retrieve the best moments of today and put them away for when I am old and rickety. I steal those from me, for me, after all.