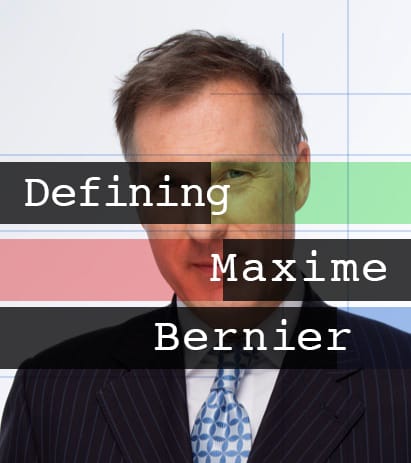 During the 2019 federal election, those inflammatory words were used by various members of the media, and the public at large, when describing Maxime Bernier, the one-time-Conservative-cabinet-minister-turned-leader of the People’s Party of Canada. The coverage was relentless and unforgiving, and eventually Bernier’s new federal party was left without a single seat. Even Bernier himself, who had held his seat for thirteen years, lost his riding.

It is fair to say that Bernier was unsuccessful getting his message to the public.

He is also an affable man. He sounds sincere when he speaks. He believes in his message, and he is ever the optimist on the party’s future.

“We had only 1.6% of the vote. If you look at the Green Party, it took them twenty years and 6 elections to have more than 1.6% of the vote. We did that in a year. We created a new party. At the same time we built riding associations right across the country in 338 ridings. That’s something the Green and the NDP don’t have right now.

So all we have to do now, we will just have to work hard and speak about our platform and our values.”

If you were new to this country, or part of our sect of apathetic voters, there was a good chance you walked away from the election believing Bernier and his party were nothing but a bunch of racists who thought they finally found a home. From there, being branded the racist party in Canada, all the media had to do was either ignore the PPC, or only run negative stories, not wanting to be seen as an outlet giving positive coverage to what was deemed as obvious bigotry.

I sometimes wonder how well-known Kinsella really is. Everyone in the Ottawa and Toronto bubble knows him. The media and party members know him. But he’s not exactly a household name, until now maybe. Kinsella, a throwback operative going back to the Chretien years, still manages to convince people to hire him, despite having a reputation of being hopelessly unsavoury, where the ends always justifies the means as long as you remind everyone along the way how great of a person you are.

Kinsella was hired by the Conservative Party of Canada to execute a campaign painting The People’s Party of Canada as a haven for bigotry and white nationalism. Secretly recorded by an employee, Kinsella was heard giving his team a pep talk on how to effectively destroy Bernier. He even tried to reinforce his motivational speech by bragging about falsely smearing three prominent politicians as racists when he knew they were not. He tries to catch himself by saying how easy it is to smear Bernier as a racist because, as Kinsella put it, “this guy actually is a racist.”

When a strong federal party hires a notoriously unethical operative to smear a new party as a gang of racists and bigots, it can be difficult to define your own brand. I asked Bernier if he thought there was a reason some racists did seem drawn to his party’s platform.

“It happened when Preston Manning started the Reform Party more than 25 years ago. People were saying that party was a racist party. The Conservative Party and Kinsella tried to do the same thing with us. That’s why I am looking at all my options to look at the legal procedures that we can do.”

Bernier might have a very strong case, especially now that Kinsella’s mask has been taken off by his own hand.

“The Conservative Party of Canada is morally and intellectually corrupt, and they proved that with their contract with Kinsella.”

It is still unknown how much the CPC and Kinsella impacted Bernier’s party, but it is reasonable to believe Kinsella was ultimately successful. On September 29th, at an event in Hamilton, several protestors accosted event attendees as they tried to get into the building at Mohawk College. The aggressiveness of the demonstrators was palpable as they screamed at seniors, calling them Nazis and preventing them from entering the building. Instances like this make Kinsella’s contract all the more mysterious. After all, his job, according to his own admission, was to activate Canadians against Bernier by stoking the flames of racial intolerance.

There are questions as to whether Kinsella’s fingerprints are on several other party missteps and controversies, including a rash of resignations earlier this year when former loyalists mysteriously began trashing the party publicly.

Operatives normally do not get caught bragging about having a track history of how their lies about other people’s bigotry have been successfully used to disrupt campaigns. In Bernier’s case, Kinsella, a self-proclaimed, lifelong fighter for racial justice, actually spent a career monetizing racial divisions he helped to stoke. When his shtick was exposed through his own accidental confessions, the hindsight view of Maxime Bernier became less blurry.

“There is legislation on defamation, that’s why I am looking at all my options.”

Objectively, there is a reason why it seems easy to paint the PPC as a problematic party of bigots and racists. After all, nobody else is talking about putting conservative caps on immigration and refugee/asylum seekers, or how multiculturalism has supposedly failed. And Bernier himself likely recognizes that his party’s image was able to be soiled so effectively because his communications team simply couldn’t cope against the onslaught of attacks.

But that doesn’t mean his critics, and especially propagandists like Kinsella, are right.

Once you start peeling the layers of Bernier’s policy ambitions, you realize the classic trope of ‘wacky libertarianism’ is just an easy fallback for critics and political opponents to attack. However, nobody has offered a reasonable explanation for how any of Bernier’s policies translates into actual racism. He wanted a cap on immigration at 150, 000 annually, and critics said it was motivated by bigotry. He said he wanted newcomers to share Canadian values, and critics painted that policy as clear cut racism.

But what are Canadian values?

To Bernier, Canadian values are actually classical liberal values; equality between the sexes, gay rights, free speech rights, and small government. In fact, when I pressed him on what it means to impose a values test, his response was similar to what comedian Bill Maher has been saying for years – by asking new immigrants, especially immigrants with a strong religious bent, if they support uplifting women or treating gay people as equals, you are actually strengthening progressive values.

“Being sure our newcomers shares our values is important. Because our cultures are not equal, that’s a fact. Western civilization values, they are Canadian values. Equality between men and women, equality before the law, the separation of state and religion.

Libertarians always have a more difficult time spreading their message to the centre or centre left. There are some overlaps on certain issues, but the motivations are worlds apart. Decriminalizing marijuana, individual freedoms, ending corporate welfare – all of these issues are shared by classic liberals. But when you have the added bonus of having to constantly battle accusations of ingrained racism, messaging isn’t the only thing lost. What’s historically referred to as opposition research has morphed into machines conducted by smear merchants. Men like Kinsella blur the lines between research and defamation, exploiting flaws in their political enemies and exaggerating them until the false brand has been achieved.

“On the economy you could call our party a libertarian party…but on immigration we are a party that wants to defend Canadian sovereignty.”

Bernier believes immigrants should be screened and prioritized based on the value they can bring to Canada. Education, skills set, earning potential – all of these data points are important to his identity as a staunch believer in maintaining security and economic stability.

Before the last election I did not think Bernier was a racist. During the campaign I was curious why so many racists seemed to gravitate to his party, and I began to wonder if there was something I wasn’t seeing. But today, with all the information we have about the dirty side of the last election, I still believe Bernier is somewhat ideological, but not a man steeped in hatred. He believes what he believes, but there is an authenticity to him that is hard to deny. He is also determined to not allow his brand to be poisoned again.

“If you are a racist or a white supremacist, we are not the party for you. Go start your own party.”

Bernier might not be everyone’s cup of tea, but he should have been judged on his policies, not his carefully crafted image by a fearful legacy party, and the desperate, sad has-been they hired to destroy him.