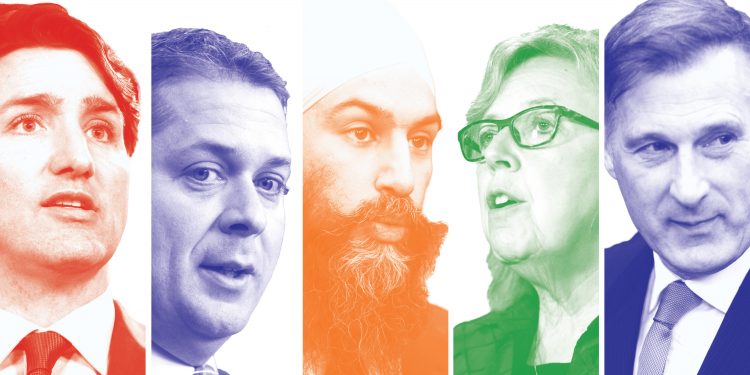 The Canadian federal election campaign is now in full swing, so you might want to get your vomit buckets ready. We are already in the middle of a trade war, only steel and dairy have been replaced with trading barbs and bullshit, propagated by leaders at all levels of government who do not share the most important quality of a strong leader; leadership.

Justin Trudeau, Andrew Scheer, Jagmeet Singh, Elizabeth May and Maxime Bernier? This is all we got? It’s a piss-poor list of yahoos, posers, puppets, and radicals ready to take their turn in a minority-ruled system, where everyone hates each other and the idea of working together seems kitsch, or sacrilege. Blind partisanship might seem like predictable theatre, but that’s precisely the problem; everything is theatre now.

Trudeau has been in campaign mode for 5 years, never adjusting his approach in communications and self promotion, leaving many Canadians with personal brand fatigue. We get it; you are Mr. Positive, ready to inject a dramatic flair where none is necessary, or stammering when you are forced to go off-script. The exhaustion we feel when Trudeau emotionalizes his statements is a legit response to what many of us see as an actor trying to find his truth, but nearly always coming up short.

Similarly, Scheer over-calculates his positions on virtually every issue, too timid to stand up to the less savoury sect of his base, dithering on social issues, and not making the type of gains an opposition party should when something like Lavscam exists. The problem with Scheer’s personal brand is that he doesn’t have one, and many voters are not interested in potentially revisiting the worst of the Harper years. Scheer floats in the around the forefront but can’t afford to amputate his fringe supporters, and so we get to see a glorified extra with dimples tell us that he’s the man for the job.

Not to be outdone, Singh started his tenure as leader flim-flamming in the Terry Milewski interview about Sikh extremism, and now seems to have zero grasp on nearly every other policy concern. Moreover, he leads a party who have embraced the toxic edge of identity politics, and his lack of understanding of his own party’s vision is apparent whenever you look at Charlie Angus’ face after Singh has spoken in the House of Commons.

May and Bernier have probably been the most authentic, and while the Greens seem poised to win another couple seats, they lost their bid to woo Judy Wilson-Raybould and Jane Philpott, making May’s party and Bernier’s stable of libertarians and social conservatives virtually irrelevant.

The result; we are in the midst of the most manipulative style of politics in our lifetimes. Our screen time is being eaten by memes and mobs, and parties have synchronized their messaging with sympathetic third party groups. We now know the caricatures of the party leaders we hate, and make excuses for the caricature of the leader we like. Everything is satire, or exaggerated, or misleading, or shallow.

For example, Trudeau is terrorist sympathizing, virtue-signalling airhead, while Scheer is a Nazi sympathizing, oil company stooge who will end abortions as he hides behind an aura of aw shucks.

See how this works? But wait, there’s more.

Singh is a Sikh extremist sympathizing, anti-middle class radical who hates jobs and will bankrupt the nation. May is Khadr-sympathizing, environmental alarmist who plays footsie with Trudeau in a weak attempt at relevancy.

And Bernier is a nutter.

All of those things are neither true or false, by the way. Each candidate bites around the edges of these caricatures just enough to warrant criticism, and then social media amplifies it a million times over, a disproportionate response resulting in deeper polarization. We all know this is the case, but we shrug and get on with it instead of demanding a shift in how we conduct ourselves.

Trudeau has a ton of material working against him, but our unemployment rate is still the lowest it has been in decades. It’s amazing that Scheer or Singh see a downside for being truthful about that. There is something fundamentally dishonest about not being able to credit a sitting prime minister when it’s due.

Our country has a crisis of leadership. There are no personalities that can bring us together. Instead, we are being tapped for our cynicism and used for our rabid partisanship, like oblivious foot soldiers doing the bidding of the clans who lie to us constantly.

The result is a clown show of overly scripted misfits and charlatans trying to win base approval, all while they placate the moderates. As long as third party groups and social media users, trolls, and bots do the dirty work, the theatre should figure itself out, as we, the audience, try not to rip our tickets in half.