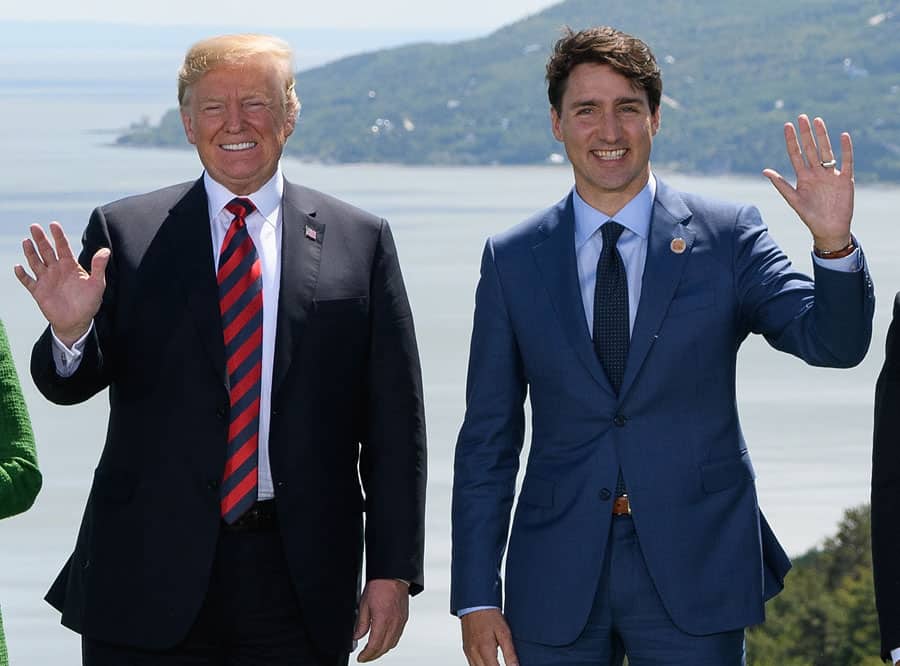 They couldn’t be more different, but somehow they are almost identical.

If you want an all-encompassing barometer to measure the disdain of the North American populace at large, spend some examining the most vocal critics of President Donald Trump and Prime Minister Justin Trudeau. Then, if I may offer some advice, take a shower.

Polarization on this continent is not a new phenomenon. We have been at each other’s throats for decades, demonizing our political opposites while excusing the scandals of the politicians we love. Those who have read my previous work will pardon me for repeating my favourite phrase, but politics in modern times is really a testament to managing hypocrisy, and that testament is currently on steroids.

What is different about the current divide is just how similar Trump and Trudeau are to one another.

Both are trust fund kids who would owe their success to their fathers. They had privileges upon privileges, skating through life via name recognition and media savvy.

Both men entered office after the political pendulum swung in their directions, by-products of regime fatigue in Canada after the Harper years, and after an 8 year long campaign among hardcore conservatives to discredit and demonize Barrack Obama.

Both men are viewed as intellectual lightweights who managed to win the highest office despite being dreadfully unqualified for the job.

Both men managed to use their media personas to inspire their own followers while simultaneously turning half the citizenry into deranged critics.

And the memes. Heavens, the evidently endless trove of ridiculous, toxic memes.

That two ideological opposites can have so many things in common is unsurprising, especially after peering heavily into the current discourse to figure out how and why people participate in the first place. The answer is anger, by the way. Unhinged, unfettered, unadulterated anger.

Not that there isn’t a ton of legit criticisms that can be levied at Trump and Trudeau respectively. Both of them are gaffe machines, unable to go even a week without saying something stunningly stupid. That their styles are different is obvious, but underneath are the same goals; to shield the public from the details of how they run their countries, and to use their personal brands to keep each base strong.

To be fair, Trump and Trudeau also have some positives in common. They both are at the helm of two countries with the lowest unemployment rate in decades. Both men also have successes in helping the most vulnerable, with Trudeau reducing child poverty by 278, 000 since taking office, and Trump surprising his critics by partnering with Democrats to pass the First Step Act, a prison sentencing reform bill.

Still, these positive accomplishments are not even close to being enough to change an indestructible truth; that all of us believe at least one of them is a twit, a dolt, an ignoramus, a traitor, a dummy, or all of the above. Combine that with the inability to criticize the side we identify with, means polarization is now so pronounced, so ingrained, that finding any common ground for the long term benefit of our nations seems undeniably remote.

Maybe we deserve this. Perhaps we should ask ourselves why listening to the same man can make half of us beam while the other half vomits. Why is it so easy to spot the flaws in each leader for one group, but impossible for the other?

Even today, both Trump and Trudeau have managed to carve out scandals with identical underlying themes; a lack of respect for the independence of those tasked with oversight, and the appearance of political interference with the justice system itself. Sure, the scandals are worlds apart as far as scope, details, and alleged offences, but the underpinnings are clearly the same, rooted in transparent contempt for how government works.

And let’s not forget the infrastructure for each of these polarizing figures; rabid, intellectually stunted fanboys and hypocrites, unable or unwilling to hold their man accountable for any of the endless trove of gaffes and folly that follow these two men wherever they go.

Because policies. Because libtard. Because Nazi.

I don’t like Donald Trump. I think he’s a moron and a fraud. I also think he is enabled by otherwise intelligent people like Ben Shapiro, who has prioritized Trump’s policies over his behaviour. I think this is short-sighted. The deterioration of the office Trump holds, or the authoritarian-light style of rebuffing congress via the Department of Justice could have a transformational impact on future presidencies.

Think of how past presidents have gotten away with bypassing congress when seeking military action, a direct violation of the constitution which gives authorization powers to congress alone, not the White House. Ronald Reagan’s Iran Contra scandal was just another war without congressional approval, but it ushered in the reckless engagements by Bill Clinton (Kosovo bombing) and the controversial resolution by the George W. Bush administration called Authorization for Use of Military Force Against Terrorists. The resolution allowed Bush to bypass congress if he felt the nation needed to act immediately against those involved in the attacks of 9/11.

Trump’s refusal to adhere to dozens of subpoenas and investigations is a precedent-setting moment for America, but half of us just shrug, open a can of beer and call Hilary Clinton a bitch. The urge to hold Trump accountable only comes from one side, and since that side is comprised entirely of social justice warriors, cucks and snowflakes (OBVIOUSLY), all of their criticisms must therefore be false. If they say Trump is a liar, he’s probably the most truthful president of all time.

I used to like Justin Trudeau, but that was when I thought he would stop campaigning once the election was over. He didn’t. Instead he is a moron and a fraud. Ever since the 2015 election, we have all been living in a never-ending screen test for a Canadian soap opera starring some guy with a nice body and a fake smile. He has been trying to cultivate trust among Canadians, and ended up reaping the opposite. Many of us wondered why he needed to be seen and liked so much. Some of us believe we now have the answers.

Trudeau has been embarking on a total revamp of social and traditional media, the same two vessels he has relied on to shape his political image. His idea to subsidize the news by injecting a select group of outlets with 600 million dollars is understandably seen as a ploy to water down potential criticisms of his government. Meanwhile, his draconian collaboration with Facebook, Google and Twitter to police online speech has an Orwellian aspect that only the most hardcore Trudeaumania fans could deny.

Did I mention both of these men are known for their hair?

It dawns on me that this piece might not gain any traction at all. By calling out both Trump and Trudeau as the dummies they most certainly are, I am isolating the same audience I should be capturing, and vice versa. But we live in tipping point times, where there is no more conventional wisdom, where memes have replaced encyclopaedias, where the things that once made us livid now make us shrug, and where we have all come to revel in our own hypocrisies at the behest of one dummy, or the other.

Two dummies to rule us all.