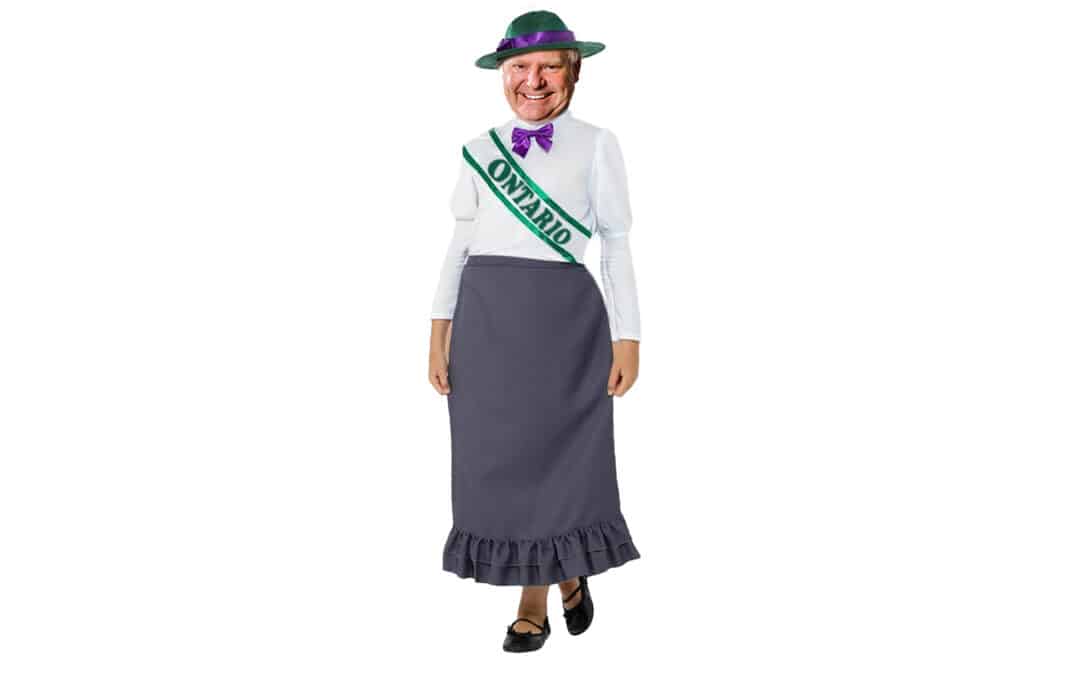 “Your children need me.” – Nanny McPhee

When I was 13 my dad took me to New York City for four days. Outside our hotel, The Waldorf Astoria, there was a Three Card Monty set up, and I watched two men grift and scam a dozen or so tourists out of hundreds of dollars. The whole thing lasted less than an hour, ending when the two men split the money and went their separate ways.

I was gobsmacked. I had seen grifting on television shows and movies (this was 1991), but seeing it up close and personal was actually impressive. The speed in which they moved, the distractions, the salesmanship; all of these elements were in fifth gear.

Sure, they were robbing people right out in the open, but their kitschy personas seduced even the locals who grew up knowing the game was rigged. (The adage ‘A sucker is born every minute’ sounds best with a New York cadence, by the way).

In Ontario, there is a grifter operating right in the open. He has a monotone-yet-bombastic, awkward-yet-strategic style of grifting. His name is Premier Doug Ford. His Etobicoke accent soothes supporters who grew tired of what they collectively perceived as Kathleen Wynne’s nanny state agenda, believing the promises made by Ford who is constantly reminding them that he works tirelessly for only them: the little guy.

The term nanny state usually implies a basic standard of belief; that the government should stay out of the way, and not be in the business of dictating to the little guy. Fair enough. The previous Liberal government had a few memorable policies that felt like governmental invasiveness, such as forcing a licensing fee for every trade in the province, a cash grab for the government who collected money from lifelong hairdressers who all of a sudden had to spend money on proving they were qualified to do the only job they knew.

But Ford, who is constantly being described as some sort of conservative populist, has shown himself as a grifter of his own supporters, playing Three Card Monty with conservative principles.

For starters, he is the only politician in Canada with his very own Fake News Network. Ontario News Now, which is essentially a propaganda arm of the PC Party, operates without even a hint of irony as it pretends to report provincial news. A provincial broadcaster, government run promotional outlet is one of the main bastions of nanny state orthodoxy, and Ford is all in. For a man who leads a party whose identity partially relies on hating the CBC, creating a miniature CBC just for the PC caucus is deliciously hypocritical.

Moving along, Ford recently decreed that gas stations would be forced to carry PC Party messaging on posters provided by the Ford government or face hefty fines. Opposition members are already reviving an old PC Party bill meant to stop partisan ads from being publicly funded, figuring the new Ford administration will balk now that they hold power.

One party official told Blackball Media that they know it will not survive court challenges, but will stand by the initial push to make their point. You can bet they will probably never levy an actual fine. Still, a conservative government taxing small business owners $10, 000.00/day for not advertising government propaganda is teapot totalitarianism.

The Ford government may need to collect those fines in order to counter the drunken sailor spending they have committed to in their first budget. After using the campaign trail to eviscerate Liberal spending under Kathleen Wynne, Ford unveiled a budget that costs 5 billion more than his predecessor, and those numbers keep going up year after year. Embattled Finance Minister Vic Fedeli’s budget speech included a reference to runaway spending, all with a straight face and without a hint of irony.

How can a man campaign on conservative principles and then spend 5 billion more on his first budget? Well, it’s all a shell game, don’t you know.

Some conservatives may have an ideological soft spot for the deep cuts into social assistance, libraries, medical procedures, paramedics, education, and the environment, but other right of centre voters must be scratching their heads knowing that despite all those cuts Ford still spent billions more than Wynne.

Nanny McFord might not be a moniker that sticks, but it is an apt nickname for a man whose entire identity is wrapped in a ‘small government’ sash. Combined with his slight-of-hand approach to leadership, Ford’s new identity seems to be that power corrupts almost immediately as he betrays the principles that afforded him victory in the first place. Like a big city hustler he has managed to take money in plain sight and act like ripping off the little guy is fine, as long as they enjoy the show.

So step right up…everyone’s a winner.