The Lost Essays: Stephen Harper and the Death of Ethics 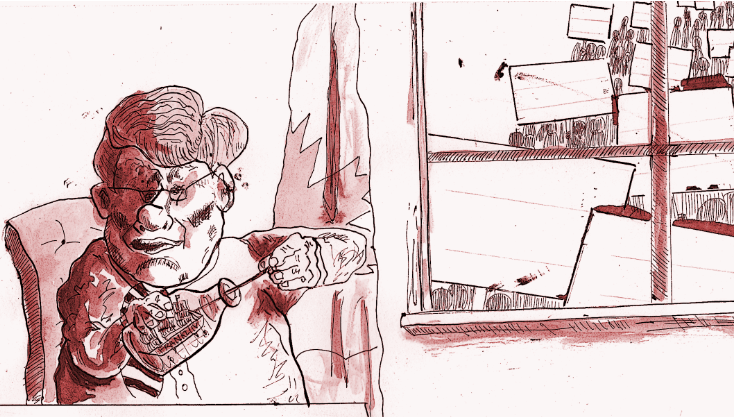 You’ve probably never heard of Trevor Stack. A young, apparently ambitious intern in Rona Ambrose’s office, Stack seems like a fairly typical twenty-something doing his best to carve out a future career in politics. He is a scholarship recipient, the president of the University of Victoria Campus Conservatives and previously worked as a Ministerial intern for the ruling Progressive Conservative Party in Alberta.

As far as a career path goes, on paper at least, Stack seems like the real deal. But recent revelations have placed the young go-getter in the middle of a controversial media storm where he is accused of covertly recording a Liberal MP and sending his comments to the Sun News Network. Stack reportedly asked to speak with MP John McKay confidentially and began asking questions about Justin Trudeau’s decree that all Liberals must be pro-life. McKay, unaware he was being recorded, stated he thought Trudeau’s declaration was a “bozo eruption” saying Trudeau’s inner circle had “no political sense whatsoever.”

Stack had everything he needed to score political points and show a fractured Liberal Party of Canada. Or did he?

By sending the recording to the Sun News Network, an organization with several former staffers who worked directly for Prime Minister Stephen Harper, Stack probably believed this was a political victory of sorts. A sitting MP criticizing his own leader does sound juicy, but Canadians, who are pretty slow when it comes to discovering and caring about any kind of political corruption, have, after 8+ years of conservative rule, woken up to the lack of ethics and constant public relations spin that touches every last facet of this government. What Stack has done, and what the tabloid network of former Harper lackeys have guaranteed, is that Canadians now have even more concrete evidence that Harper has fostered a culture of unethical behavior in Ottawa, and more importantly, a systemic lack of ethics within the Conservative Party of Canada.

Stack isn’t talking. Several attempts to reach him by email and through his social networking portals have gone unanswered, which is not surprising. But he may want to look at the recent past to see where this kind of behavior leads individuals who have a hunger to be respected in politics. Ethics may not be the common trait among politicians or advisers, but the appearance of ethics does go a long way if you want a future in public service, even if it is a behind the scenes policy or communications role. Just ask Andrew Prescott. Just ask Michael Sona. The two main culprits in the recent Robocalls scandal probably do not have a bright future in politics. They are, for all intents and purposes, sacrificial lambs for a culture where the ends may justify the means, but where do they expect to land a job in Ottawa now that their shoddy ethics are well known? The conservatives rely on public relations more than any other facet of political life, and if Harper can throw Nigel Wright under the bus publicly, Trevor Stack will most certainly be considered persona non grata for years to come.

But is all of this overblown? Is all fair in love and politics? A conservative commentator and former Stephen Harper co-worker at the National Citizens Coalitions seems to think so. On a recent television appearance Gerry Nicholls said this is a non-story and that this sort of thing – covertly recording political enemies – happens “all the time”. Nicholls did not give any examples, and when asked to name three instances where political operatives have secretly recorded rivals he remained uncharacteristically quiet. Evidently conservative partisans believe this is all par for the course, but none have been able to provide any historical evidence, however anecdotal, that this is normal in Canadian politics.

If it is par for the course, if political operatives routinely sabotage, secretly record their enemies and engage in entrapment to further their parties’ or their own political ambitions, what does this say about public service in Canada? So far only one other example of this unethical strategy can be found, and it involved another young conservative, Alexandra Constandinidis, who is the parliamentary assistant to the controversial conservative MP Rob Anders.

Constandinidis recorded a Trudeau adviser, Andrew Leslie, answering a question about his views on Israel. Leslie had said Israel had been “firing indiscriminately” on Palestinian women and children. Once again, the conservative operative asked the question and once again the Liberal target had no idea he was being recorded. The conservatives first tried to provoke anger in the Jewish community by sending the recording to the Centre for Israel and Jewish Affairs. The plan backfired when CIJA CEO Shimon Fogel sent a statement defending Andrew Leslie and indicating they would meet with him again despite the conservatives’ efforts to paint him as anti-Israel. After this failed attempt to publicly destroy Leslie, the conservatives did what they do best and sent out a fundraising letter to their supporters asking for money. The letter did not spell out the sting operation, only that the Liberal Party of Canada was covering up their apparent anti-Semitism.

The Harper Government is a public relations oriented government. The machine seems to operate in the following manner; get the youngsters in the party to operate unethically, send their manufactured news tips to a media organization filled to the brim with ideological allies, then raise money from your base while pretending you had nothing to do with how the information was unearthed. The strategy would be brilliant if it was not so painfully and obviously orchestrated.

This is the culture of the Harper Government, a government on the verge of expiry, following in the footsteps of past government who drowned in their own sense of entitlement. What Trevor Stack and Alexandra Constandinidis may not realize is they are not helping their party long term. We still do not know if they acted independently or through the encouragement of the powerful ministers and MPs they work for directly, but in either case one thing remains clear: ethics in the Harper Government is in short order, and while these examples are undertaken by the kiddies in short pants working for what used to be public servants, the real first domino of dirty politics has long been the influence coming directly from 24 Sussex Drive.