Jody-Wilson Raybould and the trouble with realizing political moments 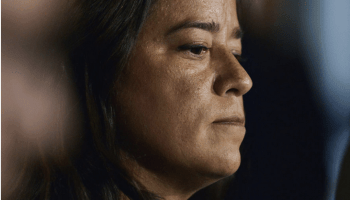 Former Attorney General Jody Wilson-Raybould is in the midst of a potential political moment. To many, she’s a hero, an Indigenous woman who is fighting against a corrupt status quo. Even opposition MPs, albeit for terribly selfish reasons, are singing her praise.

As far as Canadian politicians are concerned, Wilson-Raybould has achieved the highest level possible of respect in politics, with the only notable detractors of dye-in-the-wool partisans inside the Liberal Party of Canada.

About those partisans, they are bitter. They view Wilson-Raybould at a traitor in their midst. Many see her through the party lens, whereas you and I see this saga underwater, at best. Cloudy, stinging, wet behind the ears. Don’t feel bad. We are not political partisans.

But like it or not, support it or not, party politics currently runs this country. It’s been a part of our system since long before Canada was even a thing, and it comes with swallowing a lot of realities that may not be very appealing if you are not a member. For example, a party without party loyalty from its members, especially its members of Parliament, cannot survive. Before Wilson-Raybould, the most recent maverick MP was probably Michael Chong, the Ontario MP whose career is highlighted mostly by his firm yet respectful rejection of his leader’s, Stephen Harper’s, ideas.

Chong, certainly a stone in the shoe of the Harper Government from time to time, was never seen as a menace, or a traitor. On the contrary, he was seen as a man who was led by his principles, even if it meant falling out of favour with the prime minister. Harper even endorsed Chong’s private members bill, The Reform Act, despite it being perceived as a response to Harper’s continuation of centralizing power within the PMO.

Wilson-Raybould’s oft-cited position of judicial independence, plus her stated aversion of improper political influence, sounds like a triumph of ethics, and in some ways this is a true interpretation. However, a few aspects of the SNC Lavalin Affair hint at another set of motivations of Wilson-Raybould, including her own career aspirations.

Speculating can be a hapless adventure, but a few variables in this saga point to more than just a mission guided solely by the rule of law. Wilson-Raybould is obviously a highly intelligent person, so it stands to reason that she has at least given some thought to the perceptions people have of her actions. In fact, it would be a failure of intellect not to consider all of her options when deciding how to proceed in this scandal.

For example, Wilson-Raybould would have had to be the original source of the information that eventually landed in the lap of Robert Fife from the Globe and Mail. Whether it was Wilson-Raybould herself, or Jane Philpott, or a trusted staffer/third party, it is virtually impossible that the leak took place without the blessing of the former attorney general. The details were so specific that unless a thief had covertly made copies of her contemporaneous notes, she likely leaked her own story. So, the question becomes, why did she choose to inflict as much damage as possible to the party and government if she wants to remain a Member of Parliament?

She must have known the damage the story would cause, and she definitely understood how the optics would fall in her favour, yet she still remains inside the Liberal caucus. Recently, former Liberal Sheila Copps lambasted Wilson-Raybould, calling her a boil that the prime minster needed to lance if he was going to regain control of his party. Other liberals, most of them lawyers who are more than happy to point out Wilson-Raybould’s lack of parliamentary ethics by not filing a complaint with the ethics commissioner, or even resigning, have sustained a steady stream of fair but stinging criticism at her alleged betrayals.

So, is Prime Minister Trudeau channelling his inner Sun Tzu, keeping Wilson-Raybould as close to the party as possible in an attempt to keep her from inflicting more damage, or is Wilson-Raybould in the middle of her own private Trojan War, living inside the belly of the beast as she gets closer and closer to her real political moment – becoming the leader of the Liberal Party of Canada?

I know, it sounds insane. But since she must have known the damage her leaked story would cause, and since she wants to remain in caucus of a party she no longer trusts, and run as a Liberal in the next election even though she clearly has lost respect for the prime minister, one must consider that her long game is to eventually become prime minister herself. If it isn’t, it should be.

The recent revelation that she secretly recorded a phone call with Privy Council Clerk, Michael Wernick, adds a dimension to this story that can’t be ignored; Wilson-Raybould is not an infallible player. I hate to break it to our polarized citizenry, but she is still a politician. Politicians have ulterior motives. It’s part of their DNA.

There are some people who think her relationship with Warren and Lisa Kinsella has manifested in the release of this secret recording. Warren Kinsella, who has a reputation for being slightly abrasive and a disgruntled ex-Liberal strategist (full disclosure: Kinsella once tried to make me seem like a supporter of Adolf Hitler after he mined my published works for quotes he could use to change the context of my words, and he lied to his audience by claiming I was on Patrick Brown’s payroll), is the exact antithesis of an honourable public servant with sound ethics.

Questionable associations aside, Wilson-Raybould has a stark choice in front of her. The Liberal caucus seems close to finally putting her out to pasture, a move long overdue from the perspective of many Liberal partisans.

She could choose to cross the floor to the NDP, or even the Green Party, which would fall in line with the ‘ethical beyond reproach’ image she has been diligently trying to craft for herself.

She could sit as an independent, another choice that would show she can walk the talk and place her ethics in front of her ambitions.

Or, and this would require a full on mutiny inside the Liberal Party, she could support a confidence vote, hope she has  couple dozen allies inside the party who will vote against their leader, and make a play to become the new Liberal leader during a snap convention.

If she chose the latter and was successful, it would be the greatest political manoeuvre in Canada’s history. But the chances of the Liberal brass allowing the person who has systematically and incrementally dismantled their party, and in some cases their own prospects of getting re-elected, seems outlandish at best.

Political moments are rare. It isn’t just about winning an election. Bernie Sanders missed his political moment in 2016. He could have been transformational if he ran as an independent. By now maybe a third party would have emerged. Instead he grudgingly became a luke warm supporter of the person who helped destroy his candidacy.

“A political moment does not have to manifest greatness immediately. There is a long game to be played, if the individual has the stomach and patience to see it through. “

The only road for Wilson-Raybould is one where she makes a lot more enemies than friends in the short term, but holds her popularity among Canadians in the long term.

Her best shot at long term viability as a transformational public servant requires two main facets. First, she needs to drop the opportunists advising her from the shadows. Just pat Warren Kinsella on the head and tell him to go work on his blog.

Second, and most importantly, she should cease the death by a thousand cuts routine and make a concrete decision on her future in politics.